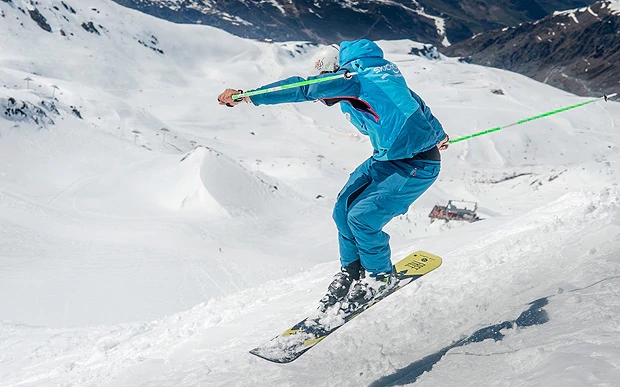 Want to try something new? Monoskiing is back!

Have you already been skiing or snowboarding and want to get something new a go on your next skiing holiday? Have you ever thought about mixing it up and standing out from the crowd with another type of skiing - monoskiing.

In the late 1950’s, Dennis Phillips inventing this type of skiing. Later a surfer chap, Mike Doyle, promoted the monoski in 1970s, and its popularity slowly increased, but this interest eventually dropped as the snowboard became the skiing alternative of choice.

More recently the popularity of monoskiing has had a definite comeback, particularly in France and the USA mostly due to technological advances in the design of the ski. People want more from their skiing experience and are always looking the next challenge.

The monoski ski itself is very similar to a traditional ski. It’s just like a wider single ski but with two bindings.  You clip yourself onto the monoski with both feet facing forwards and use your normal ski boots and ski poles.  No need for a specific of footwear, as you would with snowboarding. For everyday skiers who need to give monoskiing a try, getting to grips with the dynamics of it is easy.  But it takes a while before you to get used to it especially regarding balance. It is still possible to perform stunts and tricks, accomplishing high speeds, catching air and do conventional cross-country skiing.

A competent skier, regardless of whether you are eight or eighty, can learn to monoski in a day. With good a good instructor, better skiers can master the skills just a morning. From fun-factor perspective, it's the perfect balance between skiing and snowboarding. It really is super fun! After you've experienced the thrill of monoskiing, it is hard to go back to two skis.

As with alpine skis, the carved shape of the ski means easier turns and as a result, skiers and even snowboarders are finding the transition to monoskis an attractive one.

You might be surprised at the various designs of monoski.  Although there are general all-rounder monoskis. There are more specific monoskis designed for powder skiing or carving on the pistes. There are some impressive high performance monoskis for downhill and fast cruising. They also gives the rider great control for long arc carving turns. Just as with 2 plank skis, they will vary in length, width and will either be flexible or stiff. This skiing is more forgiving on the knees than normal twin ski skiing, which is why it appeals to people susceptible to knee problems or who have had a previous knee injury. With monoskiing, the weight is centred over the knees at the same time as they move with the axis of movement. This sort of skiing especially calls for a lot of upper body effort. There is more upper and lower body balancing to do than on normal skis. If you take on the art of monoskiing and it will be your own expression of l'esprit de glisse (the pleasure of sliding on snow).  You’ll be gliding down the slopes gracefully with the combination of floating snowboard and quick turn skiing. That is as soon as you get over the feeling of blind panic of having your feet bound together!

As part of planning your skiing holiday, why not make enquiries with the ski hire shops in your resort as to whether they stock monoskis for hire. Try hiring a monoski for a few days or even the whole week and try it out.  this will at the very least give you a chance to try out a monoski for yourself and give it a whirl on the slopes. By the end of the week, you could well find yourself looking to buy one. Or another way to try out monoskiing is to head along to the Mono-Ski World Championships...

Open to everyone,  The Mono-Ski World Championships, a fun novelty event that takes place in the Val d’Isere Oakley snow park. Everyone should go along mostly because it is hilarious!

The mono-skis are supplied by the Event team, and if you want to participate, you just need purchase to buy a Village Fete ticket from the BlueNote Bar in Val d’Isere ski resort. Your ticket will include entry to the Championships which start commence at 11am.

Even if you don’t enter, this event is well worth attending. Most of the competitors have never been on a mono ski before!  As you can imagine, its very entertaining.

The monoski was a very welcome give to the disabled who wanted to ski.  This kind of adaptive skiing enables them to feel the rush of the slopes. For disabled wanna-skiers, monoskiing paved the way for them to join their friends on the slopes. For paraplegic skiers, there are different designs to cater for different types of disability. The various monoski designs include a chair with a ski attached which is controlled with the upper body. This type of ski has been specific designed for people either leg amputations or spinal injury with lower body paralysis.

Another design similar is the bi-ski where the chair in attached to two skis instead on one. This is suited to those with legs but have limited mobility such as with cerebral palsy, multiple sclerosis, , muscular dystrophy, or spinal cord injuries. This type of skiing is normally assist with another person controlling the thrilling descent down the slopes from behind Similar to the bi-ski, there is the tandemski. The ‘pilot’ rides on on the back with articulated skates which also act at the brakes. Equally, on the tandemski, the pilot can carve out perfect turns with the edge of each ski by simply tilting the handlebar.  Just like any other skier, the both the pilot and the passenger can venture onto slopes and soak up the fun.

The chair monoski, bi-ski and tandemski can all easily use chairlifts and drag lists in complete safety. No need to get out for the to get out as the rider stays seated during the ascent.

There’s an argument that monoskiing is more environmentally friendly due to the 50% reduction of  toxic sidewalls and edges.  In return it is 110% more fun than the 2 planked skiing.

Monoskiing not only meets the needs of someone wanting to try something different. But also as an enabler to empowers individuals who are disabled, assisting them achieve their goals in skiing regardless of the physical abilities. If you want to stand out, be cool and try a new challenge, then monoskiing is the one to try.

Choosing the right skis and save money